The Back to the Future trilogy may be great classic films but they did get a few things wrong. The distinct lack of hover boards in 2015 has hit people pretty hard. The world has been predicted to end multiple times but here we are. It’s safe to say that we aren’t that great at predicting the future and hindsight helpfully highlights exactly how far off track we were. So given how hard the future is to predict is it possible for an after sales department to see ahead and future proof the workshop accordingly? And if it is conceivable, then how far ahead is it possible to plan?

Some scientists are theorising that we are on the cusp of exponential technological expansion, meaning that it is going to become harder to accurately predict what the future will look like because science and technology is progressing faster than ever before.

Although the Technological Singularity is largely referring to the role that artificial intelligence will play in a sudden growth in technology; tomorrow’s autonomous driving vehicles appear destined to be a part of this future intelligence.

The computers on board these vehicles won’t be just a difference engine, but will actually be decision makers on the road with a ‘brain’ of their own that can learn and adapt.

The biggest benefit is that autonomous vehicles will able to measure and react faster than is humanly possible, with the potential to reduce incidents on the road and save lives.

All of these developments centre on that same key benefit; improving safety and saving lives in the instances where the vehicle can react faster than is otherwise possible. The application of this to commercial vehicles by manufacturers such as Volvo has been ground breaking and advantageous in equal measure. Volvo’s video demonstrating their truck’s intelligent braking system has been viewed more than 8 million times. 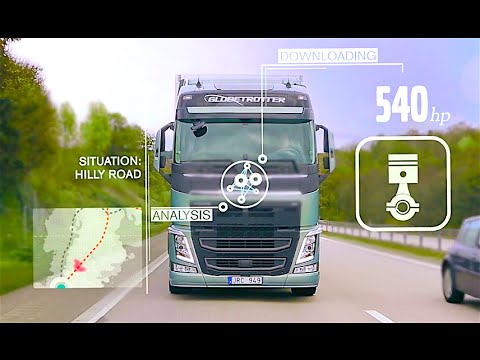 Fuel is going to be a critical resource to an autonomous system operating at its best.

The diesel powertrain will be coming under scrutiny for its delivery, torque, efficiency, and responsiveness to benefit the autonomous driving processes.

Will the fuel for autonomous vehicles include diesel? Will it require a combustible fuel type at all? Research is still on-going but as more vehicle manufacturers develop their own autonomous vehicles, and the main benefit being everyone’s safety, the goal of successfully automating the driving process is not likely to go away.

Workshops would do well to closely monitor the development of this technology, because these new vehicles are likely to require diagnostic equipment to identify faults that aren’t present on today’s vehicles currently.

One of the things the Back to the Future films missed was the inclusion of the internet in the future they portrayed. The internet would have been in its very initial years, nevertheless it was around during the second and third films and yet they missed its significance.

They failed to recognise the importance of this new technology and how it could transform people’s lives.

A more modern example would be the demise of Blockbuster video. They failed to identify the early trends towards online streaming and failed to adapt the company to follow suit. The awareness of technology research happening today will be considered to be that technology’s ‘early warning signs’ in the future.

Awareness and timeliness is essential.

It isn’t advisable to try and prepare the workshop for an autonomous vehicle to glide into a bay tomorrow because the fact is that technology has not arrived yet.

However, it is possible to pay attention to current news and prepare the business model accordingly. When we say ‘future proof’ what we mean is to avoid furnishing the workshop with equipment that ends up being obsolete. To read tell-tale early signs of technological change and equip the business to guarantee the future productivity of the technicians and workshop.

This approach is applicable to identifying equipment the workshop will need in the following 1 or 2 years, as much as for 20 or 30 years in the future.

Special tools, up to date diagnostic equipment, and bays fit for purpose are just some of the ways in which vehicle workshops will need to respond and adapt.

The future of diesel now

Fully autonomous vehicles are just one of the many possible technologies that lie ahead, but before we get there we need to identify those changes that are coming in the next 1 or 2 years and begin future proofing now.

The most notable and timely developments are the currently changing trends towards diesel and the future of these vehicles.

The current news indicates that diesel vehicles will need to be maintained to stricter and stricter standards of efficiency before we see a day where they are no longer sold.

Vehicle owners and companies will need to keep their diesel vehicles maintained to exacting legal standards and will turn to reputable workshops to do so.

A workshop can suitably prepare by beginning to educate their customers on the purpose of a Diesel Particulate Filter (DPF) and other filters in the diesel exhaust emissions system.

They can also educate their customers on the effects of a good or poor driving profile on the filters, and how deliberate servicing will benefit the emissions from the vehicle.

The workshop will need to invest in diesel filter cleaning solutions to provide those maintenance and repair services, and strongly position themselves as that reputable workshop in this time of change.