Coding in a modern world | Diesel Injectors not websites

Posted by Becca Knight on February 11, 2019
Find me on:
LinkedIn

Diesel injector coding is essential to get right with modern common rail diesel systems. Today’s euro 6 injectors are capable of operating at 2000 plus bar and this performance is not just the reserve of high end vehicle tuning any more. 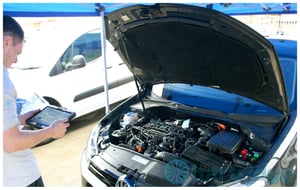 Coding an injector is a vital part of the testing and repairing of injectors, and provides an essential connection between the physical injector firing events and the digital Electronic Control Unit (ECU) of the vehicle’s engine.

Coding generation identifies the numerous operating tolerances of that injector and generates a string of digits containing this information which can be understood by the vehicle’s ECU. The ECU will then deliver fuel to that injector with better precision and timing to improve running and efficiency.

Why do we code?

Coding injectors is a factor of modern technology, notably diesel common rail technology. Although common rail is still young in the grand scheme of the diesel fuel world, common rail injector technology has developed at an astoundingly fast pace.

Coding has been instrumental in pushing high performance injectors forward. Coding is also a factor of modern emissions regulations. 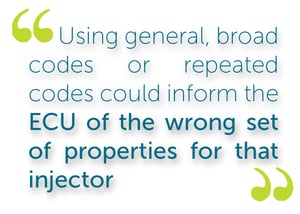 The progress of injector coding has gone hand in hand with developments of the ECU. Electronic vehicle controls such as the ECU and the EGR have been mandated as part of the euro emissions legislation to be able to measure & report on the efficiency of a vehicle.

Is it possible to code incorrectly?

It is imperative that coding is done with accuracy because fuel delivery and injector timing will be tailored exactly according to the properties of the injector that the ECU will think exist from the code it has been given.

Using general, broad codes or repeated codes could inform the ECU of the wrong set of properties for that injector such as incorrect nozzle opening time, nozzle opening pressure, and injector timing.

The resulting engine performance will be poor including high fuel consumption, lumpy running, and poor high NOx emissions. It is advisable to perform coding after testing an injector to know that all its measurements are within tolerances and that the resulting code will contain that established information.

Coding is the next logical step for workshops to do as part of injector testing & repairs that they carry out improving their overall repair quality and success rates.